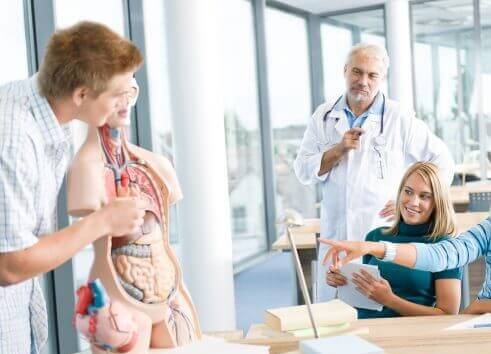 My name is Sylvie Mathers. Actually, it’s Dr. Sylvie Mathers. I’m not saying that because I try to be pompous and have the attitude that I’m a doctor, so that’s what I should be called. No, I say it because I’ve had an exciting journey to get where I am today and I’m proud to be a doctor and have a career in medicine.

Several years ago, I was a new student at the Pomeranian Medical University in Szczecin, Poland, wondering if this is truly where I was meant to be. My family was originally from Poland and the schools I chose to apply to in the States were notoriously difficult to get into. I would have had to delay my medical studies significantly, had I wanted to go to a school in the US.

Questions such as “would studying medicine in Poland be just as good as if I would’ve done it in the US?” and “would my medical degree be accepted when I go start my career in the US?” plagued me at the beginning. But this was a once in a lifetime opportunity to study medicine abroad and I knew that I wanted to be a doctor above all else.

It goes without saying that I made the right choice. I received a great education at Pomeranian Medical University, but I also had the experience of a lifetime, living in another country. Meeting so many students and wonderful people made my time spent in Szczecin that much more memorable. I completed my studies abroad and left Poland not only with a medical degree, but also lifelong friends from all over Europe and around the world. The overall experience made me not only a better doctor, but a better person in terms of my dealings with my patients.

Doctors sometimes forget that patients are only people, too. They’re nervous, scared, or confused when it comes to going to the doctor and deciding on the best course of treatment. The stress placed on patient care in Szczecin has shaped me, and my patients are happier. At least that’s what I’ve been told!

Pre-Med Course – A Semester In Berlin

OUR LOCATIONS IN GERMANY